We love animals here at BlissWood Bed and Breakfast Ranch. We have a whole host of animals who live here and BlissWood owner, Carol Davis, does great work to help animals in Texas with All Border Collie Rescue, a nonprofit dedicated to finding forever homes for Border Collies.

If you remember the Winter Olympics in Sochi, Russia earlier this year, you probably recall hearing about their street dogs. Sochi’s abundance of stray dogs made the news during the Games, when authorities began rounding up and killing dogs. When the world caught wind of this terrible development, a number of animal rights groups stepped in to help save the dogs of Sochi.

Many Olympians joined in with the rescue efforts, taking home dogs themselves. Web sites popped up urging people around the world to help and save lives by adopting a dog from Sochi.

Carol Davis found Dog #153 on one such site. The site described him as a beautiful dog with a great personality. Many of his canine buddies from the streets of Sochi had already been rounded up and killed, but Dog #153 was caught by an animal rescue group. Carol took action and began the adoption process. It was a long process – it took months to make the arrangements and help from people on both ends but, in the end it all worked out for the best.

This lovable pup is now a world traveler. He finally made it all the way from Sochi, Russia to Houston, Texas. When all was said and done, he had flown 7,000 miles before arriving at Houston Intercontinental Airport.

Dog 153 is no longer a number. Now he goes by the name Stetson and he’s adjusted quite well to ranch life in Texas! Stetson is having a great time exploring the 600 acre ranch here at BlissWood and enjoying life. He’s one lucky dog! 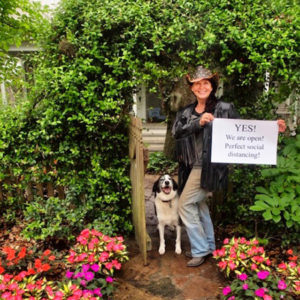 We’re working hard to keep our guests healthy and safe, and are continuing to monitor the Coronavirus situation. Please click below for the latest updates. We are here for you!